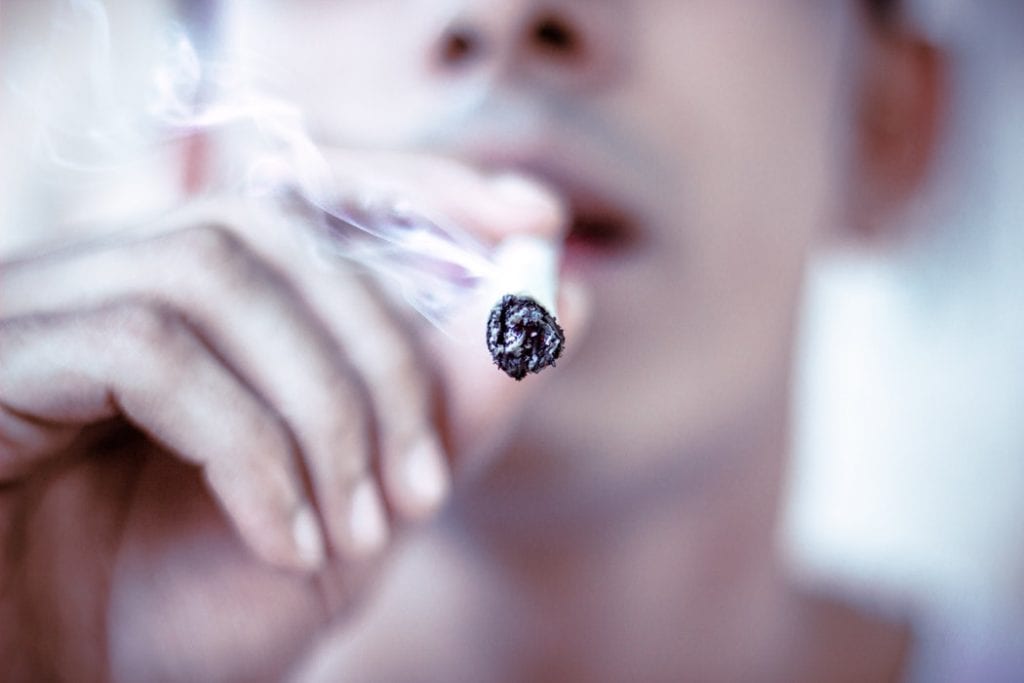 Everyone knows the undeniable harm caused by smoking to the human body. First of all, we are talking about lung and cardiovascular diseases. And meanwhile, at first the harm of this addiction affects the oral cavity. The nicotine and tar contained in the tobacco cause damage to the teeth, diseases of the mucosa and bone tissue.

The most frequent dental problems of smokers

Ulcerative necrotic gingivostomatitis is an acute inflammation of the gums that develops as a result of the accumulation of toxic components of tobacco on mucous membranes, leading to vasoconstriction, impaired circulation and tissue atrophy. The gums swell, turn red and start to bleed. Patients complain of bad breath, salivation, pain during meals. The gums of the smoker are more prone to infectious diseases than non-smokers, in addition, tobacco smoke has an anesthetic effect, reducing pain and successfully masking problems with the gums. For this reason, the problem is most often detected only when bleeding is already beginning.

Periodontitis is an inflammation of the tissues surrounding the tooth, to which leads untreated gingivitis.

Leukoplakia is the most common dental disease of smokers. There is even a special term for “leukoplakia smokers”, which distinguishes this form of the disease from other varieties. This pathology is characterized by hardening of soft areas of the palate, which acquire a specific whitish-gray color. Against this backdrop, red dots stand out, with more severe lesions passing into nodules. These formations disappear if you quit smoking. However, with the continuation of smoking, they easily degenerate into malignant tumors.

Cervical caries is a typical tooth-smoking disease in which a tooth begins to break from the gum. Who treated him, he knows how long this is a long and painful process, unlike the filling of an ordinary hole found in the lower or lateral part of the tooth.

Parodontosis is a gradual decrease in the amount of bone tissue, which is an incurable and painful disease, in which the teeth react with aching pain to the most insignificant external stimuli, such as cold, hot food and drink, etc.

Darkening of the teeth is an aesthetic problem that any smoker faces. Pigmenting of the teeth is most pronounced in the cervical part of the tooth and is explained by the accumulation of tar precipitating from tobacco smoke. The color of tooth enamel gradually changes from brown to black. The deposition of tobacco resins on the teeth also promotes the accelerated formation of microbial plaques and the development of caries.

Carcinogenic effect of tobacco – oncological diseases of the mucous lips and oral cavity develop, the mortality of which among smokers is 24 times higher than that of non-smokers.

Smoking causes harm not only to the smoker himself, but also to his children. In children born by parents-smokers, pathology of formation and eruption of teeth, bite anomalies are more often noted. Tooth enamel is quickly erased, caries and periodontitis develop more often.

Dentists agree that the treatment of oral diseases in smokers is much more difficult than for non-smokers. It is believed that, against the backdrop of smoking, the therapy of diseases leading to tooth loss is practically unpromising. Influence of such components of tobacco smoke as nicotine, carbon monoxide, cyanide waterway causes vessel spasms, their thrombosis, a significant deficit in the supply of oxygen to the tissues and leads to the fact that the healing and recovery process slows down and the risk of complications increases dramatically.