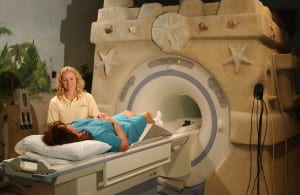 Magnetic Resonance Imaging (MRI) is executed to obtain scanned image of those parts of the body that cannot be scanned by X-rays. The most common use of this medical procedure is to scan brain, which cannot be detected by X-rays. As its name suggests, MRI involves very large and powerful magnet that aligns the magnetisation of certain atomic nuclei in the human body. The alignment of magnetisation is systematically altered by application of radio frequency magnetic field.

Thus, a rotating magnetic field is produced that can be detected by the scanner. The detected images are used to construct the image of the part of the body that is scanned. Both 2D and 3D figures can be obtained with the help of MRI. MRI creates good contrast between various soft tissues of the body and is useful in imaging brain, heart, muscles and cancerous tissues more than other imaging procedures such Computed Tomography (CT) or X-ray. MRI does not involve ionising radiation unlike traditional X-ray or CT-scan.

Magnetism, the same mechanism that makes MRI so useful can also indirectly cause injury or even death the patient who undergoes the scanning procedure. Everything that is responsive to magnetic field and radio frequency get excited when the person enters the machine. Aneurysm clips, surgical prostheses, shell fragments and other metallic implants or ferromagnetic foreign bodies are potential risks. In fact, several deaths have been reported where pacemakers of cardiovascular patients malfunctioned and caused the death. In this context, the concern regarding dental implants becomes considerable.

Even though effects and side-effects of MRI can be learnt from online or printed articles, the safest practice is to provide all the details to the expert, who can evaluate the situation.

The article is brought you by Dental Implants by Dentist Valeria Lawrence, DDS