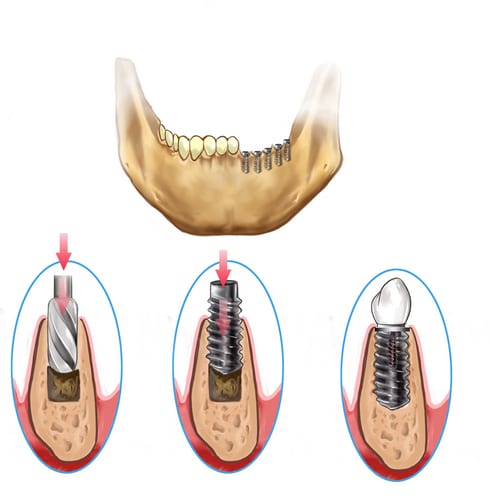 The Mayan civilisation has been known to have conducted the earliest form of dental implants more than 1350 years before P I Brånemark began his work on titanium dental implants. Back in 1931 in Honduras, while excavating Mayan burial sites, archaeologists discovered a mandible fragment of a Mayan girl, dating back to 600 AD. They noticed that 3 tooth-shaped shell pieces were used to replace three lower incisors. The world of archaeology, for 40 years, was of the view that these shell pieces got placed after the death as a form of ritual. However in the year 1970, a dental academic from Brazil, Prof. Amedeo Bobbio, studied the specimen and noted the formation of compact bone around the implants. It allowed him to draw the conclusion that these dental implants were done during the lifetime of the woman.

A research was conducted by Cambridge University, to study the flow of blood in vivo where the workers found a process of building a titanium chamber and embedding it into the tissues of a rabbit’s ears. P I Brånemark, an orthopaedic surgeon from Sweden, got himself interested into the study of bone healing and its regeneration. He adopted the “rabbit ear chamber” principle designed at Cambridge for using it in the femur of a rabbit. After studying it for some months, he attempted in retrieving the chambers only to found that it was next to impossible in removing them. He observed that the bone had developed so closely to that of the metal that it adhered effectively to it. He further carried out a number of studies, using both animals and humans as subjects that enabled him to confirm successfully this impressive titanium property.

Leonard Linkow, in 1952, carried out his first implant, within 4 months after coming out from the dental school. He placed over 19000 implants by the year 1992 and then stopped counting. At the time of retiring in 2002, hi work included an impressive 36 patents and 12 books. For many, Dr. Linkow is regarded to be the torch-bearer of implant dentistry.

Stefano Melchiade Tramonte, an Italian doctor, meanwhile understood that this particular metal could be utilized for dental restorations. A screw made of titanium was designed by him for his own use and later used it in quite a few patients of his. In 196, the positive results of those studies got published.